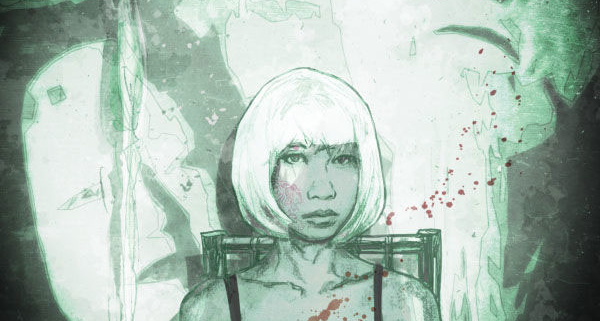 Pearl volume 3 issue #3–here it is! Years in the making! The very bloody face-off between Pearl and her genuine archnemesis pain-in-the-ass yakuza crime boss Mister Miike! Here comes another fully painted comic book experience about a tattoo artist assassin unlike anything else on the stands. Michael Gaydos’s unique multimedia approach needs to be experienced.

It’s a media circus as Team Zeros entire crew kicks off their PR tour of Japan, and Jenny is reunited with Uncle Fuji and everyones favorite weapon, Nemo! Meanwhile, director Santos megalomaniacal intentions are made clear, as we see the correlation to her motives and the incident that spiraled our drunken hero into her darkest times. All this, plus the affair that will have EVERYONE talking, and the debut of Jennys brand-new costume!

It’s a roaring start to the second Young Hellboy series, from Hellboy creator Mike Mignola and cowriter Thomas Sniegoski, with art by Craig Rousseau and colors by Dave Stewart.

Available for the first time in English! The thrilling conclusion to the provocative horror of The Hellbound by Yeon Sang-ho, director of the internatonal hit and cult favorite film Train to Busan and cartoonist Choi Gyu-seok.

THE LONESOME HUNTERS #2
After fleeing home during a monster magpie attack, Lupe becomes a student of an aged monster hunter. They’re on the run from ancient evils determined to take them down and retrieve the relic they protect. Tyler Crook’s solo series, The Lonesome Hunters, continues this week in issue #2.