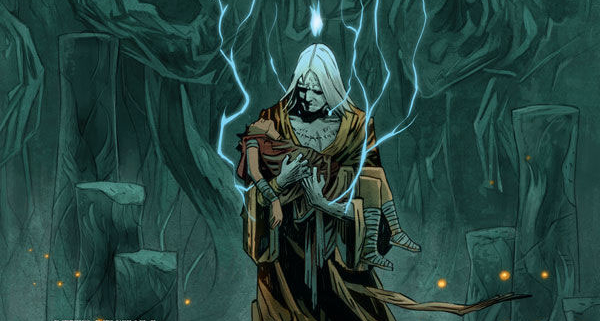 DOUBLE WALKER TPB
Cully and Gemma decide to take one last trip to the magical Scottish Highlands before their baby arrives. What was meant to be a romantic trip soon spirals into paranoia and violence as a bizarre string of murders follows them on their journey. Michael Conrad (Wonder Woman, Midnighter) returns to his horror roots and into the surreal and twisted worlds in which he is most at home.

Collects the Comixology Originals series in print for the first time!

Lilja and Frankenstein’s exploration of the surface world takes a dangerous turn–between monstrous people and genuine monsters, not everyone will survive.

THE WITCHER: THE BALLAD OF TWO WOLVES #1

An all-new Witcher story inspired by a classic fable or two!

The renowned monster-slayer and infamous witcher, Geralt, is beckoned to the town of Grimmwald. When a strange occurrence stirs murmurs of a werewolf on the prowl, rumors spread about the peculiar arrival of three sisters. With a grand mystery and a monster to kill, Dandelion may just find the inspiration he needs to write the perfect ballad.

In 2001, Hellboy quit the B.P.R.D., leaving its roster of special agents to defend the world from any occult threats—and the growing menace of the frog army—without him. Now, their adventures are collected in one continuous saga, following the exploits of Abe Sapien, Liz Sherman, Roger the Homunculus, Johann Kraus, Kate Corrigan, Ashley Strode, and many more from the war on frogs through the end of Ragna Rok. The end of the world looms closer in this third volume, and the B.P.R.D. struggles to put a stop to it.

The bumbling barbarian Groo has made quite a name for himself, traveling the land leaving a path of destruction and cheese dip. He is either so greatly feared or favored wherever he goes, Groo’s earthly reputation causes a Groo deity to arise in the heavens! While Earthbound Groo hungers, his Divine Groo alter ego unleashes chaos!

The only way to survive an impossible break out is to plan for the impossible. But when Liam and his crew watch their plans fall apart, their presence is revealed and deadly robots are coming for them, they face a final choice: either save Liam’s brother and the ones they came for . . . or risk it all to save every captured young person and, just maybe, the whole planet.

Don’t give up yet–the thrilling finale of Break Out is here!