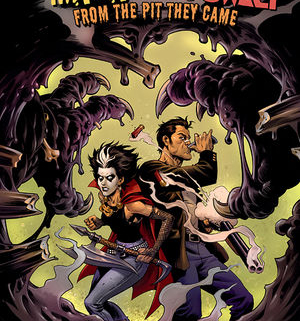 Shop ‘Til You Drop!

The Penn Mills Galleria is about to be demolished. Five teens sneak into the mall to take a last look around before it’s gone. However, while Penn Mills has been closed for years, the mall is far from abandoned. Written by Adam Cesare, a critically acclaimed horror author and a leading voice in the emerging genre of contemporary YA horror.

The hit manga returns! Food is our means of survival . . . and the most frightening terror weapon of all. Stalked by a sniper after discovering an experimental rice field deep underground, Division 3 searches for the mysterious actress at the heart of their investigation, Kirika Nouzen. But she’ll soon step on stage, dagger in hand!

Jeff Lemire and Dean Ormston’s Eisner Award-winning Black Hammer superhero universe is given a closer look, with two complete series drawn by Tyler Crook and Tonci Zonjic! Collects Skulldigger and Skeleton Boy and The Unbelievable Unteens in a deluxe, oversized hardcover format with a new cover, sketchbook extras, and more!

Hellboy creator Mike Mignola is joined by co-writer Christopher Golden and artist Matt Smith, featuring the colors of Chris O’Halloran, for a story of occult adventure and unlikely romance.

Blackwood by Evan Dorkin, Veronica Fish, Andy Fish, and Greg McKenna, follows students at Blackwood College for occult studies. When an ancient evil is uncovered, our heroes must accelerate their studies–for the fate of the world! This new edition collects the first two volumes of Blackwood in an oversized, deluxe, hardcover format with a new cover, a bonus sketchbook section, and pinups by Peach Momoko, Becky Cloonan, Andrew MacLean, Tyler Crook, and many more!

Collecting three exciting standalone stories from the world of Stranger Things, this book is the perfect gift for any young fan of the hit Netflix series.

Collects Zombie Boys, The Bully, and Erica the Great.