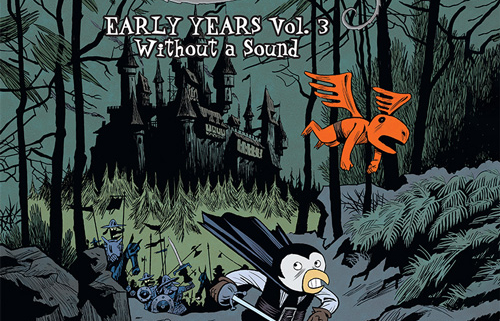 The legend of the founding of Dungeon continues with two all-new chapters! Old Arakou, Hyacinthe’s father, feels rusty and mopes at the idea of dying in his bed. He never ceases to remember the old heroic days and his pals he wants to connect back with. So, he mounts his faithful steed, much to the chagrin of Alexandra who, worried for him, accompanies him on this crazy ride. Meanwhile, in the ruins of Antipolis, Comor and a handful of lords are preparing to take back power…
The second story presents the arrival of young Marvin to the Dungeon, ready to become its most faithful protector. The city of Antipolis destroyed, his father dead, Hyacinthe de Cavallère finds himself alone to fight against the threats of the attackers eager to appropriate the Dungeon. The duchies of Clérembard and Vaucanson are determined to enlarge their territories… Prospects for the Dungeon look dire but as the two forces attack, they are not expecting the fierce opposition awaiting them in so many forms, including that of the most powerful of the warriors in the making: Marvin the Saurian.
8 ½ x 11″, 96pp. full color trade pb, $15.99; ISBN 9781681123028