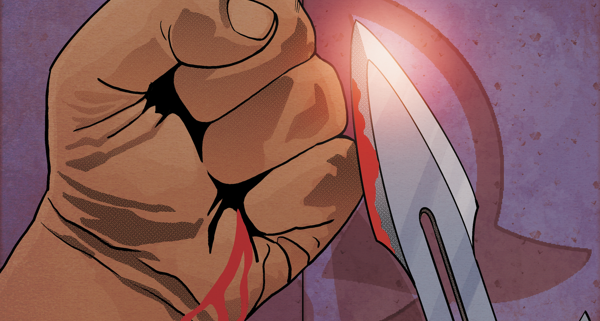 Tasked with a mission from the Prophets, Benjamin Sisko enlists the help of an old friend from Qo’noS to track the ship and persons responsible for slaying the gods.

Be sure to beam up IDW’s brand-new, flagship Star Trek ongoing series that features fan-favorite characters from every era of Trek, including Sisko, Data, Dr. Beverly Crusher, and more!

Nostalgia for the world’s worst video game brings a girl back to her childhood in an action-packed indie graphic novel about friendship, family, and three-hit combos.

It’s an age-old story: for her birthday, Dul wanted the hottest new video game, but her mom accidentally bought her Super Trash Clash, one of the worst games ever made. Years later, when an older Dul finds a cartridge in a vintage store, memories come flooding back of simpler times when she could disappear into electronic worlds or spend hours battling with friends and enemies, and the love and sacrifices that bound her family together.

The year is 2008. Networked computers and video game consoles have connected millions across the globe in virtual combat…and an insidious intelligence has taken notice.

The insectoid Nebulans, would-be conquerors of Earth, have uploaded the collective fighting techniques and strategies of gamers worldwide directly into the central processing unit of their cyborg champion. What chance does Godzilla have at victory when his vicious opponent, Gigan, has been augmented by the savagery of all humanity?

This is it! The final G.I. Joe: A Real American Hero story arc at IDW Publishing comes to a bombastic conclusion!

The game for the fate of the world has reached its calamitous finale, and it’s time for every single player to go…ALL IN! New and classic heroes and villains will fill the pages as the fan-favorite creative team of Living Legend Larry Hama and SL Gallant bring us this FINAL special overlength issue of their long and celebrated G.I. Joe: ARAH run at IDW Publishing!

It was a crazy plan. They faced impossible obstacles and wild twists and turns they never could have imagined.

Now it’s time to see if Ma and her crew can rally to salvage their death-defying heist or if any chance for a better future is going to go up in smoke. Scott Snyder and Hayden Sherman bring the fiery first saga of Dark Spaces to a stunning conclusion!

Long before becoming a pawn in the Rat King’s Armageddon Game, Leatherhead ran rampant as one of the TMNT’s most iconic foes!

Relive some of the ruinous reptile’s most raucous tales in this collection featuring the lethal Leatherhead!