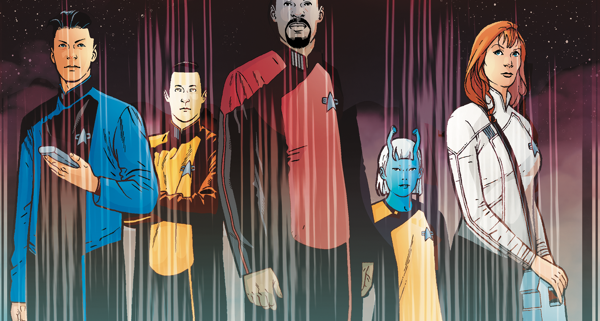 It’s stardate 2378, and Benjamin Sisko has finally returned from the Bajoran Wormhole omnipotent. But his godhood is failing with every minute.

Sent by the Prophets on a mission to the deepest parts of space aboard the U.S.S. Theseus, he witnesses the unthinkable: someone is killing the gods. And only Sisko and his motley crew of Starfleet members from every era of Trek can stop them.

Get on board IDW’s brand-new, flagship Star Trek ongoing series that goes where no comic has gone before!

As Shredder and Leonardo team up with Cudley the Trans-Dimensional Cowlick in order to seek out the help of the enigmatic Cherubae in Dimension Z, Michelangelo joins Commander Dask and his Neutrino warriors on a quest to locate the rebellious Nova Posse in Dimension X.

Meanwhile, Raphael is forced to swallow his pride—and his hatred—as he hunts down the missing Old Hob in New York City. But even if they find them, will the TMNT’s quarries be willing to join the battle against Rat King’s latest deadly pawns—Baxter Stockman, General Krang, and Madame Null—who are already taking the fight to Donatello and Jennika in Mutant Town?

Rick and Morty Vs. Dungeons & Dragons:
The Complete Adventures

It’s the COMPLETE ADVENTURE! Grab your dice, pencils, and spellbook as Rick and Morty Vs. Dungeons & Dragons returns in this min-maxing, saga-spanning collection!

When Morty asks Rick for help learning how to play D&D to impress the girl he has a crush on, it ends up drawing the entire family into a D&D world, where they inadvertently help the “bad guys” win…but thankfully make it right in the end.