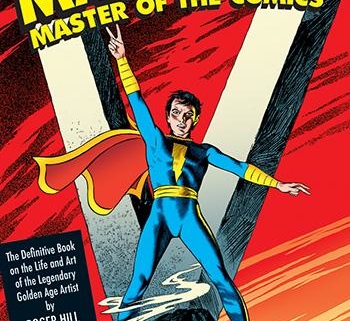 Mac Raboy: Master of the Comics examines the life and legend of one of the fine artists of comics. Beginning with his WPA etchings during the 1930s, Mac Raboy struggled to survive the Great Depression and eventually found his way into the comic book sweatshops of America. In that world of four-color panels, he perfected his art style on such creations as Dr. Voodoo, Zoro, The Mystery Man, Bulletman, Spy Smasher, Green Lama and his crowning achievement, Captain Marvel Jr. Raboy went on to illustrate the Flash Gordon Sunday newspaper strip, and left behind a legacy of meticulous perfection.

Through extensive research and interviews with son David Raboy, and assistants who worked with the artist during the Golden Age of Comics, author Roger Hill brings Mac Raboy, the man and the artist, into focus for historians to savor and enjoy. This full-color hardcover includes never-before-seen photos, a wealth of rare and unpublished artwork, and the first definitive biography of a true Master of the Comics.

A limited number of digital and print review copies are available upon request—please specify the format you prefer. If you have not reviewed for TwoMorrows previously, please include a brief list of your credentials when requesting review copies.

The author is available for interviews upon request.

Mac Raboy: Master of the Comics