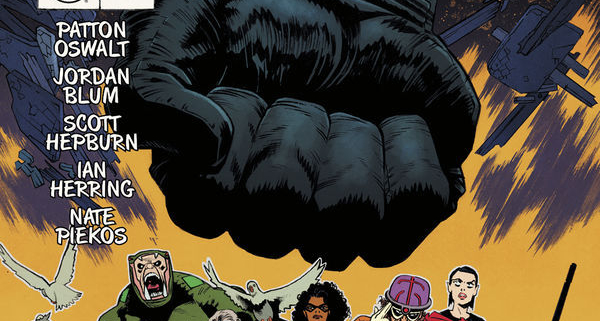 The debut series from Patton Oswalt and Jordan Blum!

It’s hard out there for a supervillain. Not the world conquerors, chaos engines, or arch-nemeses, but the little guys. The ones who put on uniforms, knock over jewelry stores, and get tied to poles. And things are about to get worse. The psychotic Stickman has murdered the sidekick of Twilight City’s premier crime-fighter, the Insomniac. The Insomniac’s teammates are tearing Twilight apart, desperate to capture Stickman. Bearing the worst of the crime crack-down, a ragtag team of disgruntled c-list villains forms to take down the Stickman themselves. With art by Scott Hepburn, Ian Herring, and letters by Nate Piekos.

A supernatural tale of friendship, the devil, and moral gray areas from the creator of Giant Days!

A new year begins in Tredregyn, and a Satanic ritual goes awry–bringing the filming of a cozy TV detective drama to town. Unfortunately, this particular Pandora’s box contains a few things a lot less pleasant than casual jobs and showbiz glitz. Plus, in a special backup feature, a teen sleuth puts the cat among the parish pigeons as she attempts to solve the disappearance of a glamorous author. New from John Allison with Sammy Borras!

When the members of a Republic mission led by Senator Padmé Amidala are abducted by the ruthless Separatist General Grievous, Anakin Skywalker and Obi-Wan Kenobi jump to the rescue. But the operation quickly goes awry, and the Jedi find themselves cut off and surrounded by an army of battle droids! Danger and deception at the height of the Clone Wars, in Star Wars: Hyperspace #1.

GET IT TODAY!
THE WITCHER (NETFLIX): JASKIER FIGURE

Toss a coin to your Witcher, a friend of humanity!

Dark Horse Comics, in partnership with Netflix, present a high-end figure line based on the hit TV series The Witcher. These deluxe hand-painted plastic figures feature details as they are seen in season 1. Jaskier the bard is the self-appointed best friend of the Witcher, Geralt of Rivia.

CHECK IT OUT!
DRAGON AGE: WRAITHS OF TEVINTER HC

The trilogy that pits Fenris and the Inquisition against the Venatori for the fate of Thedas now collected in a deluxe, oversized hardcover!

Cullen Bunn (Harrow County), Danny Luckert (Regression), and Leila Leiz (The Last Book Youll Ever Read) present a brand-new horror anthology flip comic taking place in a haunted comic book shop with a twisted retailer filled with tales of terror sure to leave you with the lights on.

Stabbed in the back, poisoned, and left for dead by her own biker gang; Kali sets off on a one-way road of vengeance across a war-torn desert battlefield.

CHECK IT OUT!
MIND MGMT BOOTLEG #3

From New York Times bestselling and Harvey award-winning graphic novelist Matt Kindt and David Rubin (Ether) comes the next chapter in the conspiracy-laden and mind-twisting universe of Mind MGMT.

Dark Horse Direct and CD PROJEKT RED are proud to introduce the next figure based on The Witcher 3: Wild Hunt! Donning the fabled Toussaint Relic Armor, Geralt fights his way through the darkest of fairy tales in the Land of a Thousand Fables! Sword at the ready, our hero is ready to cut down his foes to complete his quest!

From the creator of Bloodlust & Bonnets and the popular webcomic My Life as a Background Slytherin, Emily McGovern, comes this hilarious tale Twelve Percent Dread!