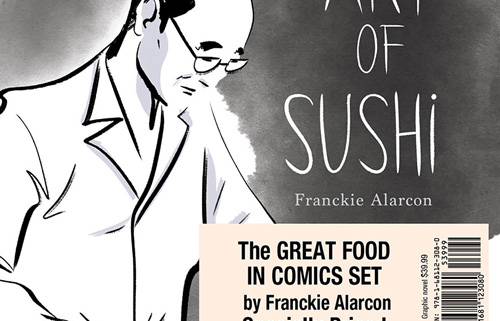 The GREAT FOOD IN COMICS SET
By Franckie Alarcon

Two delicious books in comics on food reunited! Sushi and Chocolate are explored.

Fly to Japan and come discover all there is to know about sushi. After revealing the secrets of chocolate to us, Franckie Alarcon offers a gourmet panorama of this exceptional dish that has conquered the planet! But do you really know sushi? The author traveled to Japan to meet all the players involved in the making of this true work of culinary art. From the traditional starred chef to the young cook who is shaking up the rules, including all the artisans and producers involved, this book covers the most emblematic of Japanese products from A to Z. A fascinating journey of discovery that, along the way, tells a lot about Japan itself. You’ll never believe the precision and detailed obsession with quality ingredients involved.

And for Dessert: Following Jacques Genin for a year, Franckie Alarcon hobnobbed with one of the biggest chefs of Chocolate. Former chef and pastry chef for prestigious restaurants, this super-talented autodidact shares all his passion and knowledge of chocolate and his process for creating recipes. In this docu-comic, we travel with the starry-eyed author, satisfying many a craving from the chef’s amazing atelier above his store, trying his hand as an apprentice, all the way to the Peruvian cocoa plantations where another chef shows how one carefully chooses the beans.

In this era of fake news and ‘deep state’ this couldn’t be timelier! The paranoid cult-classic science fiction mystery is now collected in one specially priced epic set of 4 volumes! Set against the background of a nightmarish 1950s crawling with communist spies, corrupt FBI agents, McCarthyites, Stalinists, cold warriors, flying saucers, mysterious government organizations, The Silent Invasion weaves a byzantine tale of mystery and deceit as bewildered investigative reporter Matt Sinkage pursues the truth behind an apparent alien invasion of earth that points to involvement at the highest levels of American government officials.